A month or so ago, a member of the Erasable Podcast Facebook group posted a picture of some pencils he bought from Japan — a Mitsubishi Uni model called “Palette” which bills itself being “designed for students. 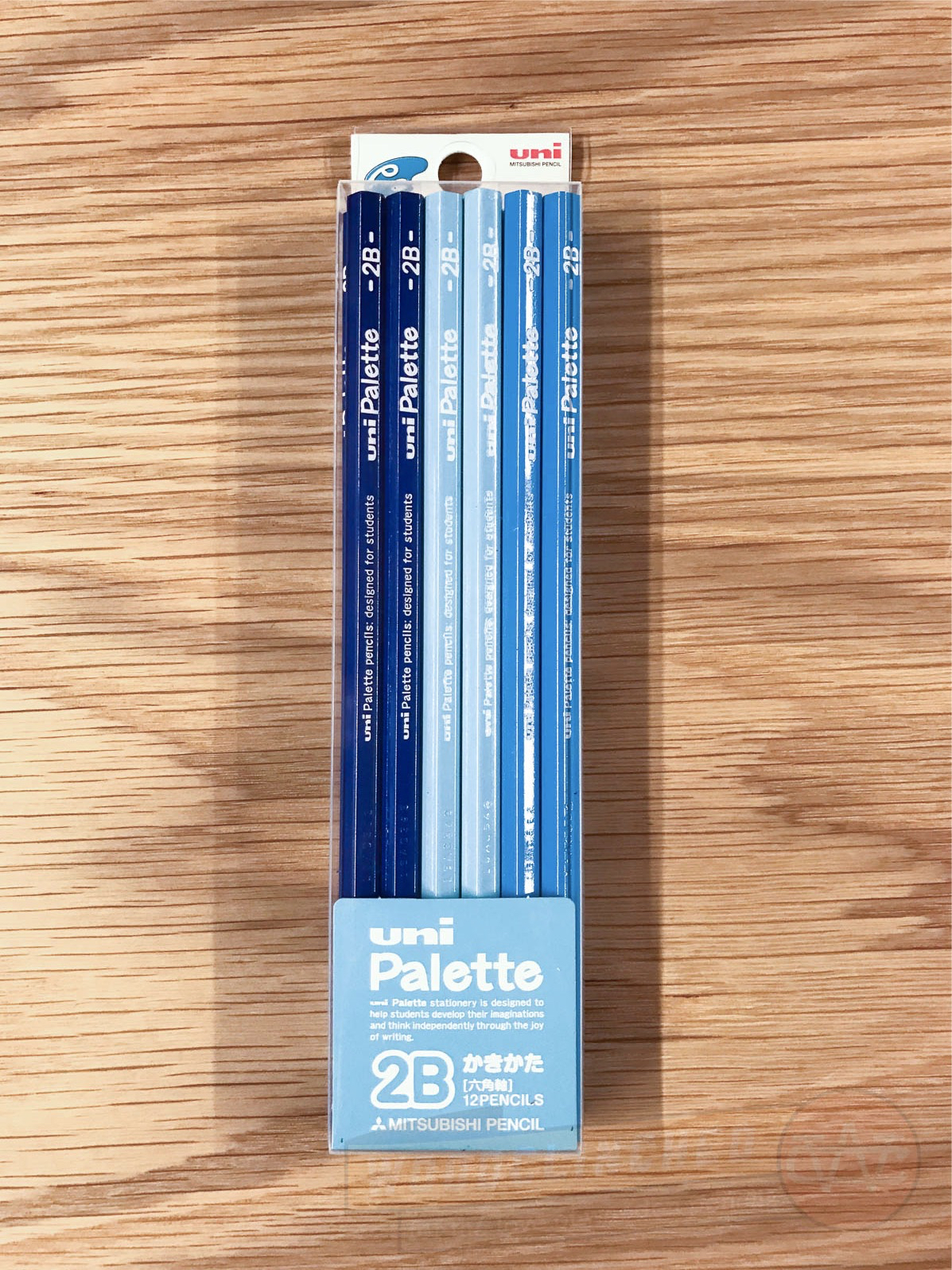 According to the box, Mitsubishi says:

“Palette stationery is designed to help students develop their imaginations and think independently through the joy of writing.”

What really struck me at first about these, when seeing a picture of them, was the three shades of bright, brilliant blue on the pencil barrels. From a rich Navy blue down to a vibrant Baby blue varnish, with bright pearly-white imprints, this stood out to me, especially compared to its higher-end cousin, the understated maroon Hi-Uni.

My wife, considerate person that she is, noted my enthusiasm and went about tracking down a pack. She found a seller on Amazon that shipped from Japan, for free! Of course, it took almost a month to arrive, but when it did, I was so excited to break it open.

As I mentioned before, the most striking feature of the pencil is the bright blues it comes in. It feels a lot more fun and light than the darker, serious maroon, black and gold of the Hi-Uni. It makes a lot of sense, being for students. 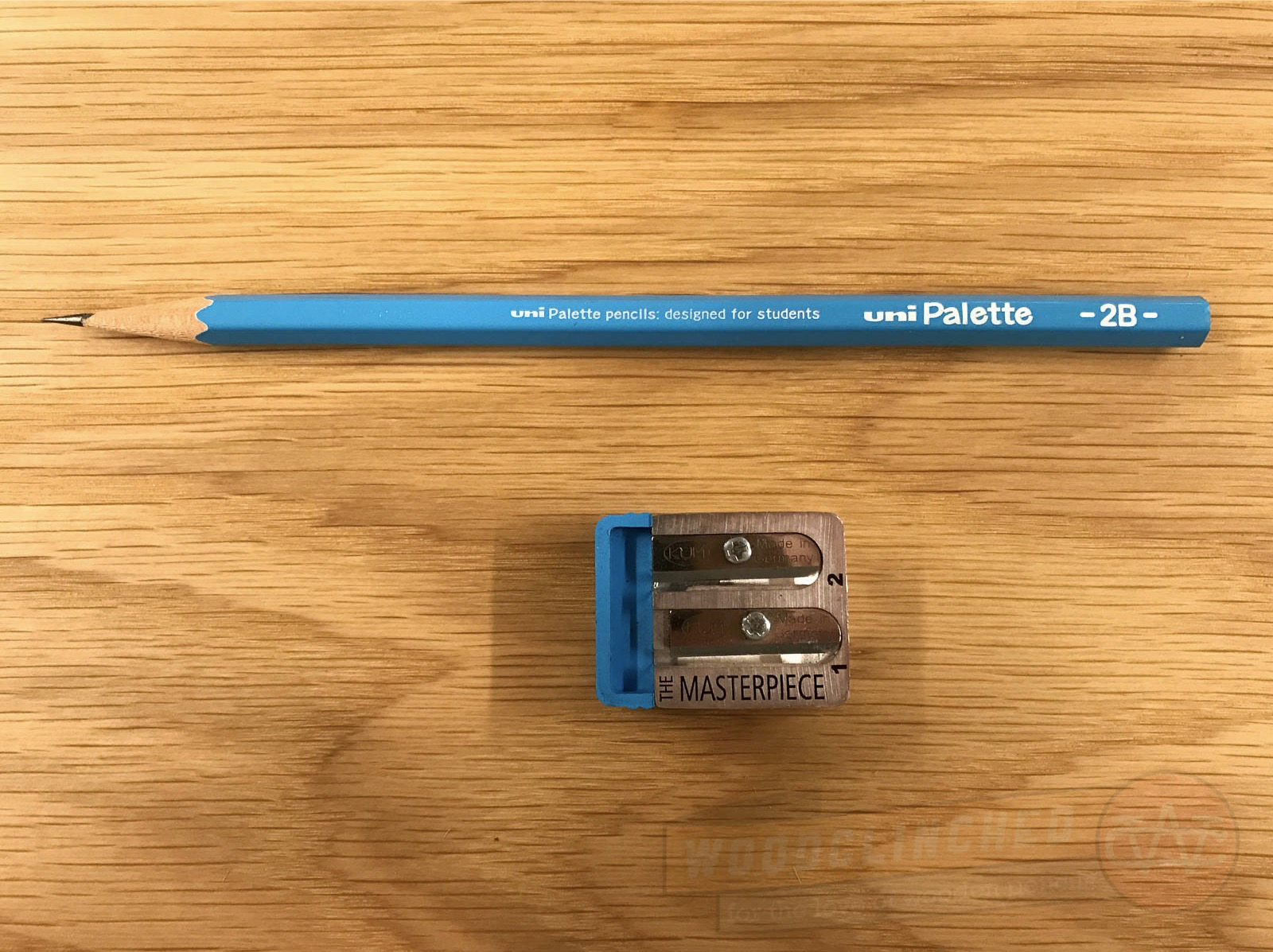 The ends were unfinished, which was a bit disappointing. One of my favorite things about many Japanese pencils are the dipped or capped ends that often have a pinstripe or some detailing to finish it. A bright white to match the foil stamp would have been nice. But to keep costs down, I completely understand why it was bare. 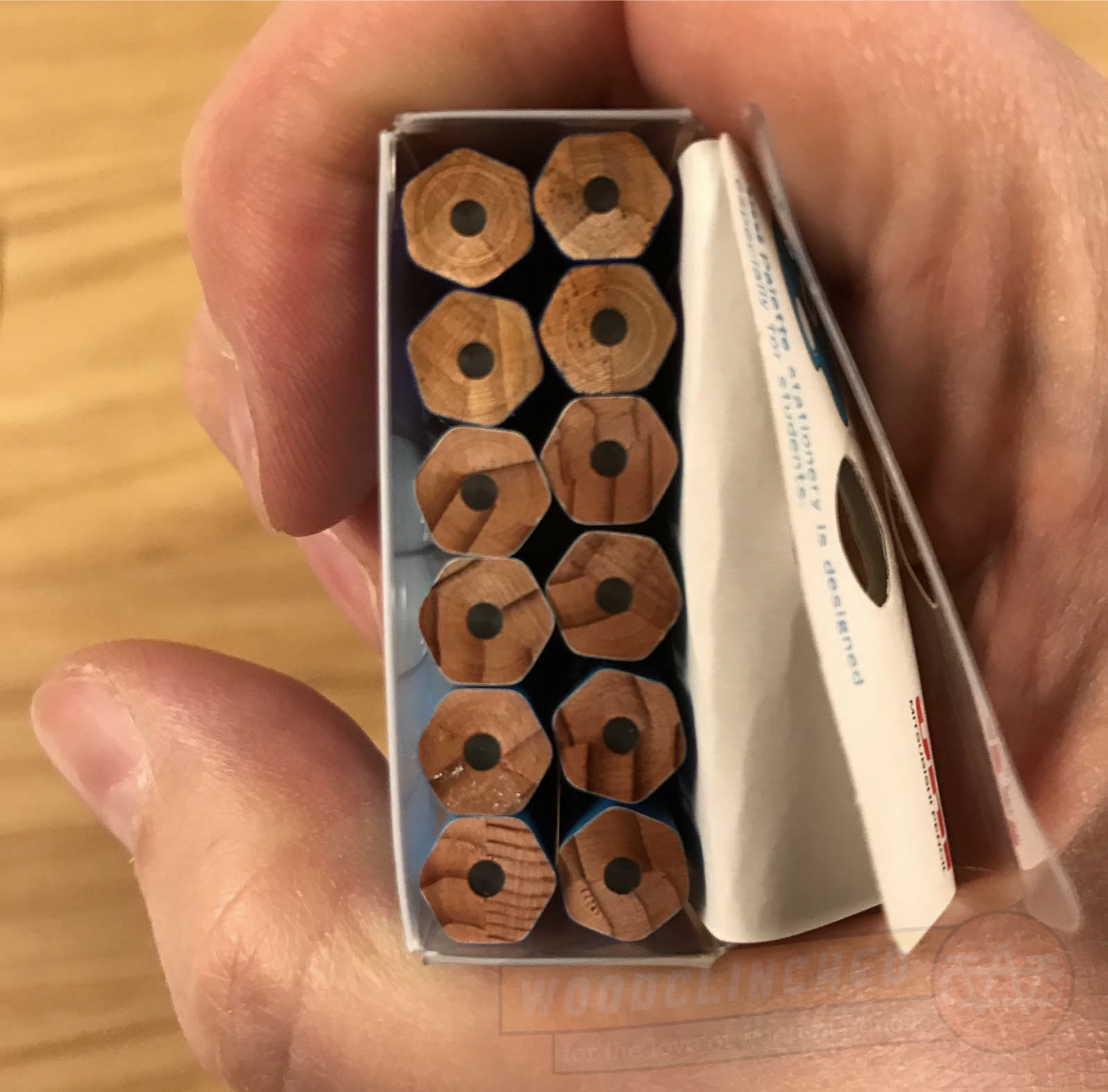 Upon closer inspection, I was pleased to see that all the cores looked perfectly centered inside the wood. The casings seemed perfectly aligned and there were no chips or paint overspill despite the dramatic woodgrain. 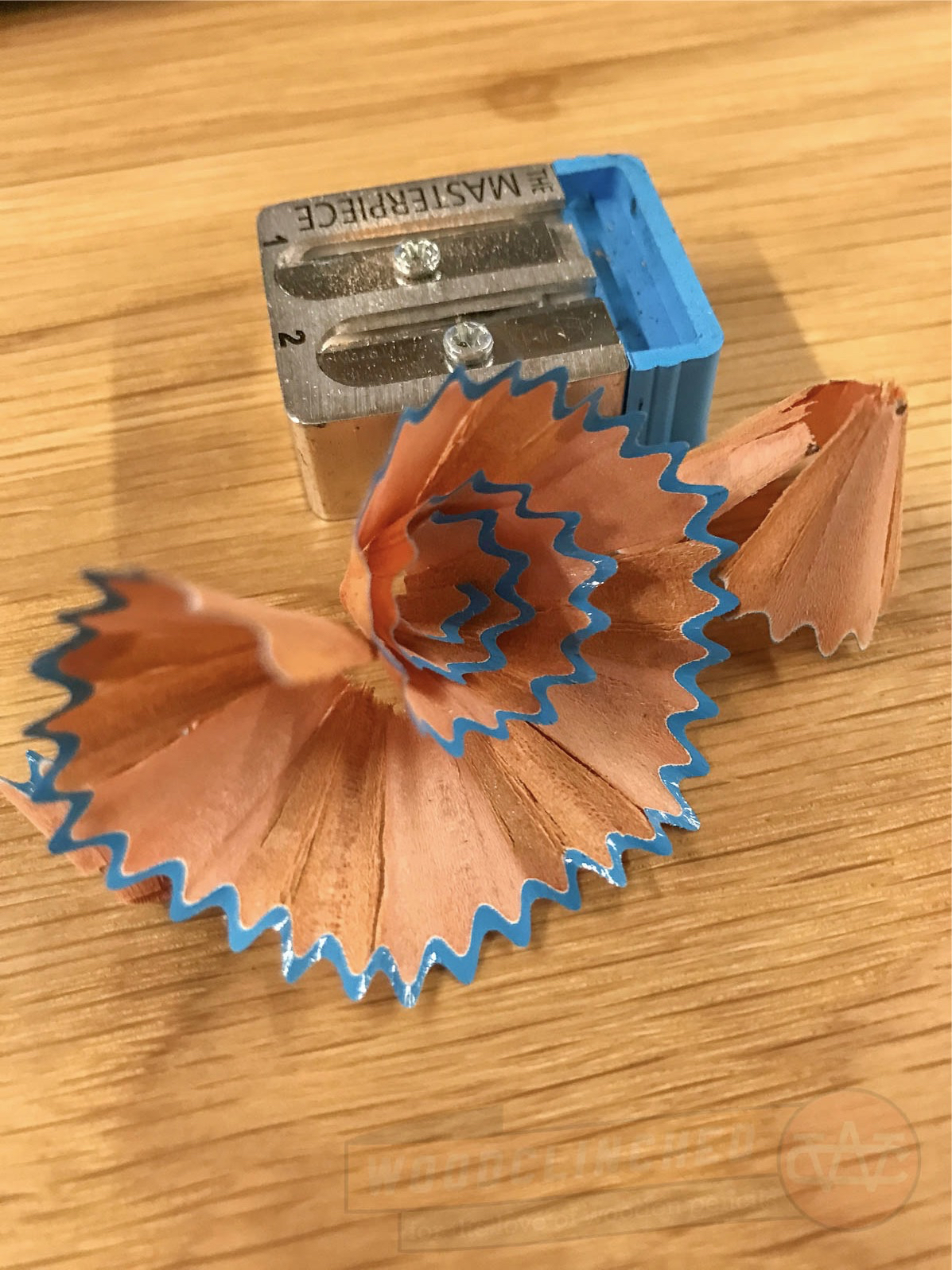 The pencil sharpened like a dream. As with many Japanese pencils, It sharpened smooth and the wood sheered off in almost one piece. I used my Kum Masterpiece, my favorite hand-held sharpener, to get that razor-sharp long point I prefer.

The first thing to note is how dark and smooth it is. For a 2B, it was so rich and smooth — waxy, almost — that I thought it was an error. Surely this was a 4 or 6B! 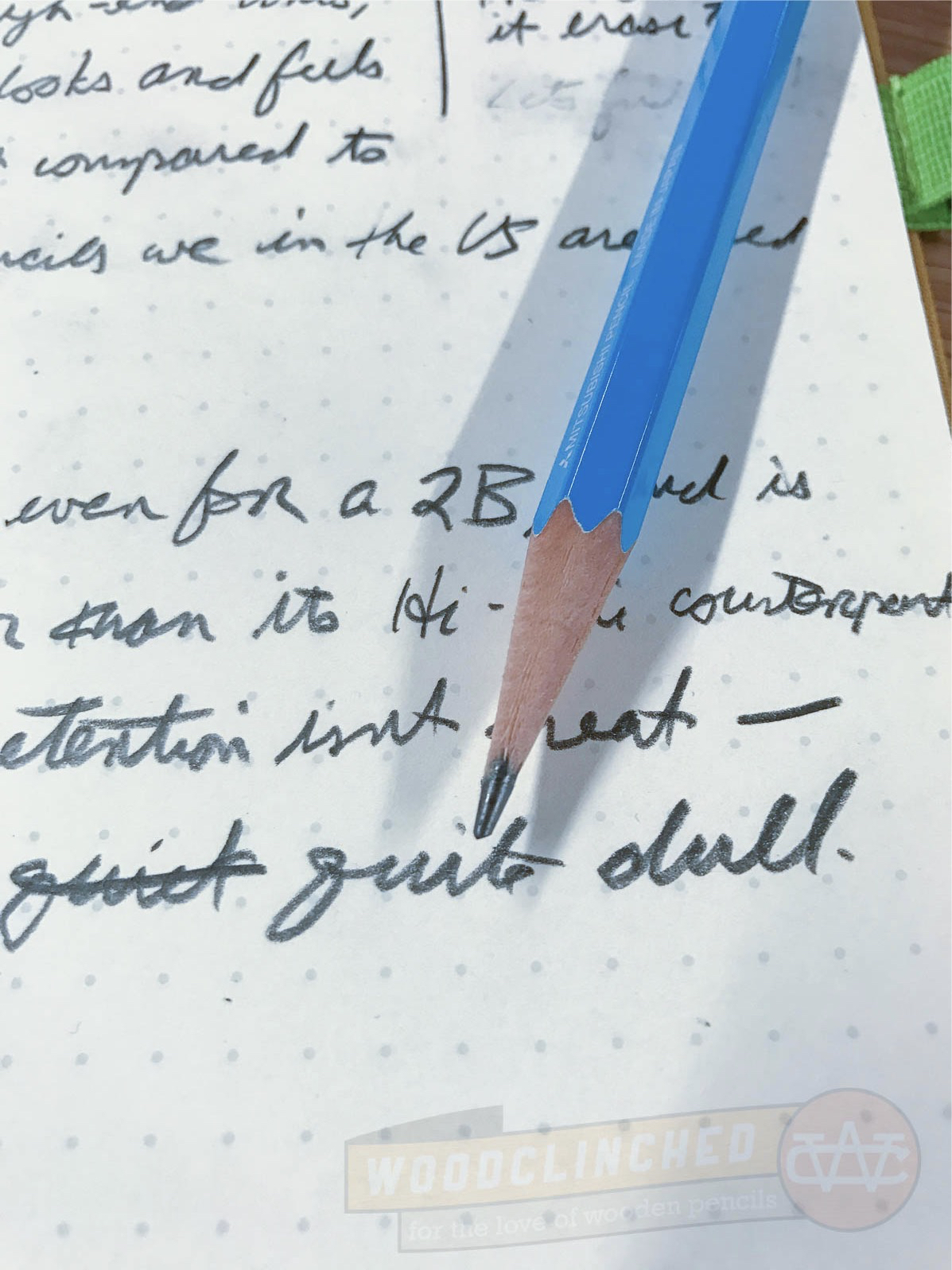 Because it was so soft and smooth, it didn’t hold its point for very long. It could be because I was writing on fairly toothy paper — a Baron Fig Confidant — but by the time I got two-thirds of the way down the page, the point was quite dull. I wasn’t even pressing very hard.

However, what really makes this pencil stand out is the smudgeability (is that a word?). As soon as I wrote a few words, I ran my finger across it and barely got a smear. This felt more like a 2B than something softer and darker.

What makes it “designed for students”?

The day I opened up these pencils, I had lunch with a friend of mine: Bruce Eimon, who started Think on Paper .Co, a company specializing in Japanese stationery. He was raised in Japan, and deeply understands the Japanese stationery market — how it reflects that industry’s values, their philosophy of product design, and how they approach creativity and learning.

It’s important, he says, for Japanese schoolchildren to understand how to use a pencil. They spend a lot of time taking tests — writing and filling in little bubbles on a standardized exam. This pencil is soft and dark, so students don’t have to press too hard, which can affect their handwriting. It’s lightweight and relatively thin — for little hands — and is probably relatively smudge proof because those hands are often clumsy and are dragged through the graphite markings.

If you’re in the US, it’s pretty hard to get ahold of these — CW Pencils doesn’t have them, and neither do JetPens or Pencils.com. As far as I can tell, I can only get them on Amazon. But, the good news is that they’re not expensive — less than $7 for a dozen. They just take a while to get here.

Check out my Medium Series review of this pencil.

If you’re interested in picking up a dozen of these for yourself, you can find them on Amazon, here!

EDIT: Someone pointed out to me that there are also Palettes in gorgeous pastel colors with pink and orange in the package, and Palettes in a soft triangle shaped barrel!

Also, if you are reading this on your mobile device and have Medium installed, check this out — I was playing around with Medium Series, their new format similar to Snapchat or Instagram stories. I wrote this same review there, too.