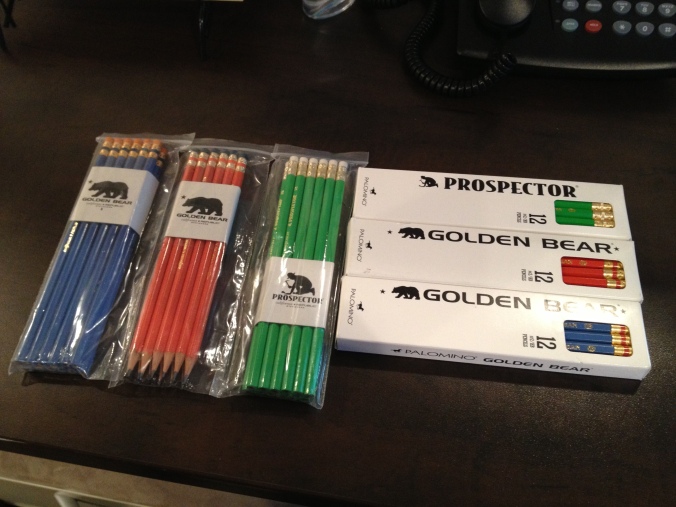 DISCLAIMER: Okay, so it’s been two years since I’ve worked at Pencils.com, so at some point, I should stop disclaiming myself. But, I worked there in early 2011. I am no longer paid or affiliated with Pencils.com in any official capacity. They sent me the products you see above for free, but they do not compensate me financially in any way.

There have been some seemingly subtle changes going on in the Pencils.com store recently. But they are important to note.

A Palomino Golden Bear next to the old California Republic Golden Bear. I appreciate that they don’t come factory sharpened now.

I think this was a wise choice. The California Republic brand for CalCedar’s pencils was pretty weak. No one really identified their pencils with that name. The Palomino, one of my favorite pencils in existence, is a much stronger brand, and made much stronger by the visibility of the new Blackwings being wrapped into their brand.

That, along with the new packaging, really showcases the brand of these pencils.

Secondly, no longer are these pencils made in Thailand (Thanks, Charles!) — they’re manufactured right here in the US of A, at the Musgrave Pencil Company in Shelbyville, Tennessee. (Warning: their website is atrocious, in sort of an awesome way.) And even with this radical change in supply line and vendors, the price has not increased (or, admittedly, decreased)!

The biggest change — which is tragic to me — is that the triangular Golden Bears were discontinued. I love triangular pencils, and I really loved these. According to Charles Berolzheimer, the Pencils.com President and CEO, Musgrave just doesn’t have the tooling capability to make the triangular barrels.

I’m glad that I have a whole bunch of them left, though I usually give them out when I explain to someone about fancy pencils. I may have to be a bit more miserly about them now.

Charles also tells me the oft-overlooked child-focused Spangle will be discontinued, too, as they sell through their current stock. While I have a few of them, I haven’t used them enough to really form a coherent opinion on them.

Coming later this year, Pencils.com will have some changes in the orange tipped and untipped Palominos, too. Hopefully I’ll be able to tell you more about them when I get to try them!

Differences in appearance and experience

First, the new USA-produced Golden Bears and Prospectors are noticeably heavier than the old ones. I need to get my hands on a digital scale to tell you how much heavier they are, but it’s not a burdensome heaviness — it feels more substantial, like it’s a fancy hardwood in the barrel.

The ridges of the hex shape are ever so slightly sharper, too, so you can feel the hexagonal shape. They’re not so sharp that they’d hurt your finger while you grip it, but you can definitely pick out every plane of the barrel. They’re not rounded edges like the old-style pencil.

There are some subtle changes in labeling besides the brand change. Instead of a “HB” label indicating the more classic European graphite hardness scale, there’s a “2”. From a marketing perspective, I understand why they did this. If someone was buying pencils for a standardized test, which explicitly say to use “#2” pencils, a typical American may be wary of a pencil that says “HB”.

The blue Golden Bear (with orange eraser) changed in fairly subtle ways. Instead of a blue stripe on the ferrule, there’s a red stripe.

The Palomino Prospector Pencil, top, compared to the California Republic Stationer’s Prospector, below. Both from Pencils.com. Apologies for the light wash in this image. 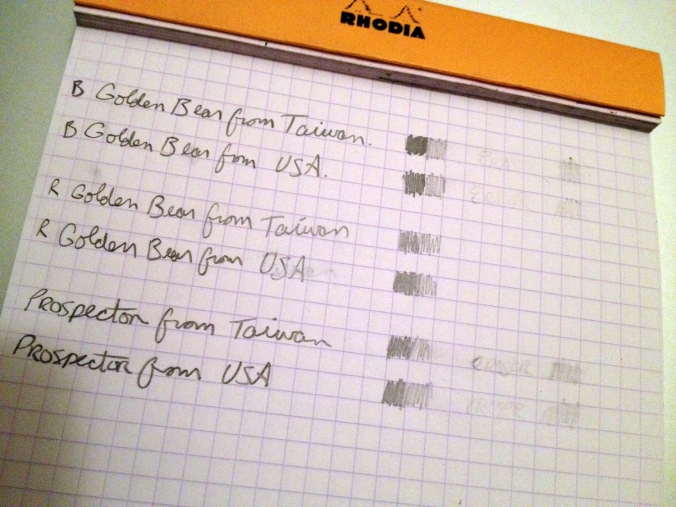 Both Golden Bears and the Prospectors pencils by Pencils.com were put through a performance test. Click to embiggen. (Also, please pretend that said THAILAND, not TAIWAN. That was a factual error on my part.

I alternated use of each pencil on-and-off for about a week. I can tell you that I noticed no difference in performance in the Golden Bears, good or bad. To me, that’s a good thing — I really like the way they write. (I’d compare them to a Dixon Ticonderoga, but with the tactile feel closer to a Palomino.)

I’ve never been a huge fan of the way the Prospectors write, but at $2.25 for a dozen, they’re definitely worth the price. Both Prospectors are a bit scratchier than a Golden Bear, though the new one was the TINIEST bit smoother.

The erasers, which look and feel identical on both Golden Bears, performs identically. (I didn’t have my red Golden Bears with blue erasers when doing this eraser test, so just the erasers on the blue Golden Bear and the Prospectors were used.)

The Prospector was a different story. The new erasers feel a bit more vinyl than the grainy Thailand-made Prospector. It erased better, too, if you notice in the photo above.

Before, I used my Palomino Blackwing (602) and my Palomino Proper almost exclusively, though I had a few triangular Golden Bears at work for quick notes. I think I may need to add these new blue Golden Bears to my rotation, though — it’s just a gorgeous pencil, full of color and personality, and now it feels better in my hand. I’m excited that the Palomino line is going to be made in the US, and for the same price as before.