I’ve long been a fan of the pencil cup. At work, I have an old mug from my local public radio station from back in the early 80s — although I have lots of mugs from various pledge drives, this particular one was from the Goodwill — a really cool find by my mother.

At home I have two or three mugs hold pens, pencils, rulers and other various long, stick-like utensils that I want to store upright.

So I never really thought about any kind of decorative desk holder — until Mike Dudek came along.

Mike’s a stalwart in the pen community — his blog, The Clicky Post  is a great place to find pen, paper, and interesting product reviews for the analog-minded. His photos have always stood out to me; he’s a really talented photographer of small, round, long objects, which are, in my experience, pretty hard to photograph.

He sells a series of handmade wooden pen holders made out of solid blocks of walnut (I think) that he cuts, sands, polishes, stains, and drills holes into. They’re absolutely gorgeous, and they come in all sorts of shapes and sizes. Look at this beaut, the Display: 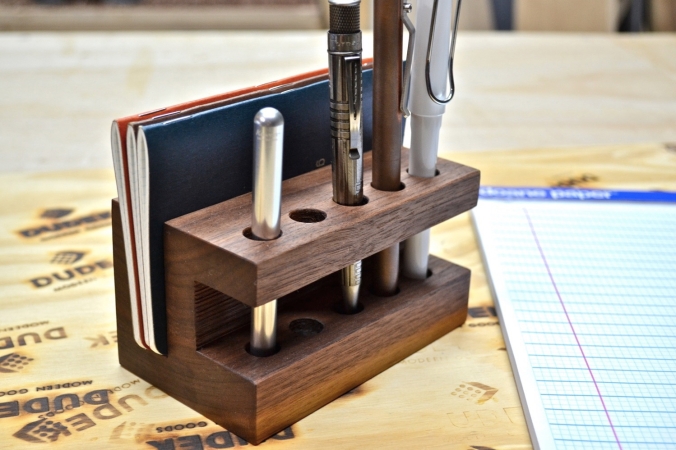 He’s really been getting into pencils lately, which is awesome. In fact, Mike posted a philosophical discussion about woodcase pencils on his blog last week. My favorite part:

With the digital world consuming a lot of how people’s thoughts are recorded out of “convenience”, this is bad for even basic click pens, but imagine how this has to be for the wooden pencil!   Let me explain: To use a pencil not only do I have to carry around a seemingly fragile stick of wood but I also have to carry around an apparatus with a blade to actually make the stick usable.  And then, to continue writing with it I have to keep sharpening the stick.  And then, I have to find a place to dump the excess debris (shavings) to dispose of them.  Within this context the pencil doesn’t even stand a chance against the hardcore digi folks. But, the truth remains that the pencil is living on and they are being made by probably the millions every year.  We live in a digital age and yet we still produce tools to write with that could probably trace their lineage back to the cave drawings of the Paleolithic Era.  Usually with “antiquated” products, they end up on Etsy or specialty shops for high premiums being styled after vintage or retro.  Not the pencil.  You can still buy a dozen pretty good pencils for less than $5.  So, if you really want to get your retro on, pick up a pack and start sharpening.

He may have been thinking about pencils hard because of the new product he released two days later! It’s called the “Divide”, and is made especially for a wooden pencil user in mind: 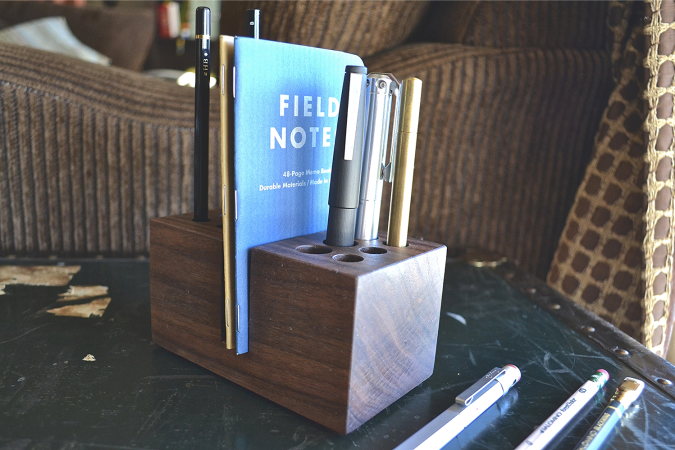 About this product, Mike says:

With The Divide, the pens and pencils on your desk can have a place to live in harmony being partitioned by a few pocket notebooks.  There seem to be graphite and ink camps in our community, so now people have no excuse but to let their writing instruments of all kinds play nicely together in an attractive, handmade walnut pen holder.

It’s based off a custom block Mike made for Tim Wasem from The Writing Arsenal (and my friend and Erasable co-host!). And, he was kind enough to send one to me!

It has six skinny holes on one side of the blog, perfect for a standard-width woodcase pencil. On the other side, there are three large holes, for Sharpies or fountain pens, and three medium-sized holes for regular pens. Each of the holes have a small point holder at the bottom, so a sharpened pencil, inserted point-down, will stand upright. Mike really thought about the details.

Here’s mine, right out of the box: 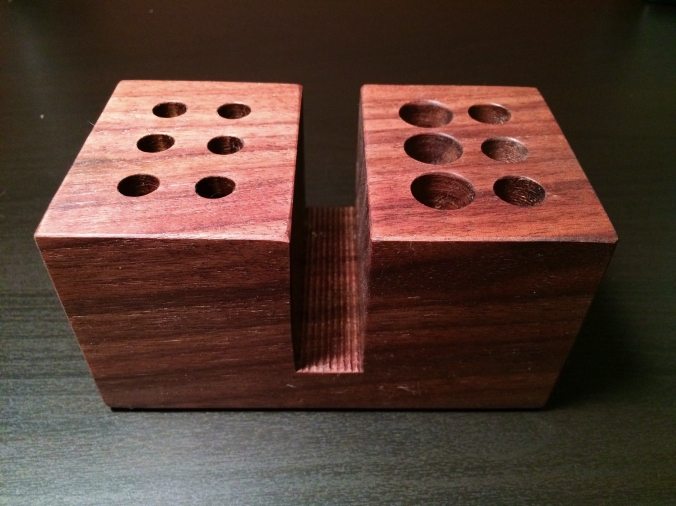 And here it is, filled with writing accoutrements: 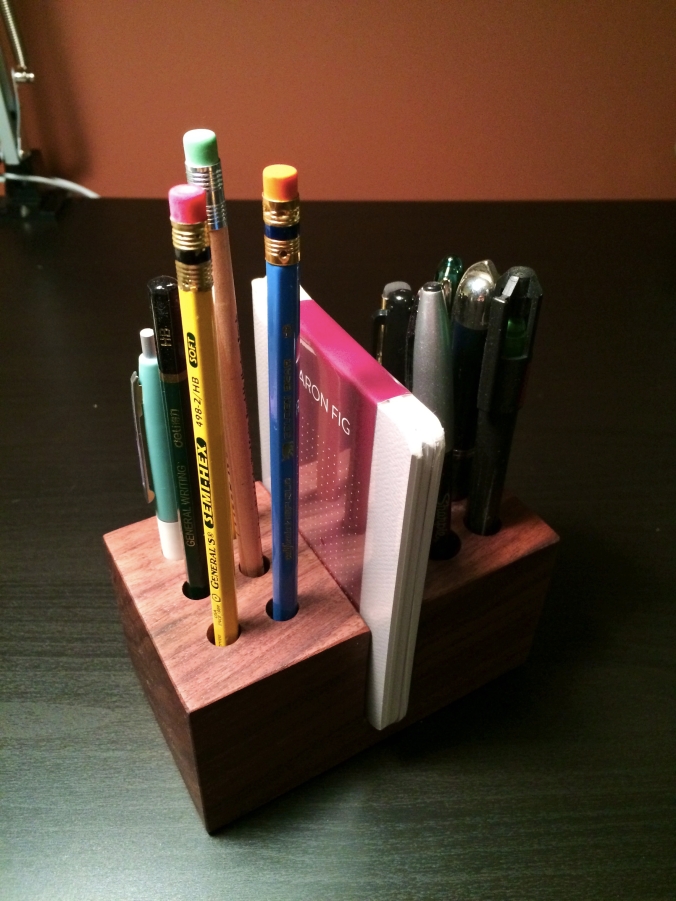 This thing is so nice, it’s going to be around for a long, long time. Generations, even.