Like many bloggers in their late-twenties, I am proud to be a child of the 90s. I grew up on Nickelodeon, pump-up sneakers, beige Apple computers, Ecto-cooler Hi-C “juice”, and lots of bright, neon colors. And if, like me, you remember the 90s kid culture, you’ll probably remember this commercial from the Saturday morning cartoons:

That’s right. Yikes. I LOVED these pencils. It was a thrill for me every fall to go with my mom to K-Mart and buy school supplies, because she indulged me and let me get these colorful little sticks of fun. Just like the kid in the commercial, they were the opposite of boring. Everything about the design was crafted — from the contrasting (and often, conflicting) color scheme to the odd shapes, from the dyed wood to the bright rubber (and later, polymer) eraser.

And now, they have all but disappeared.

Of course, when I was ten (probably the same age as the kid in the commercial), I didn’t care who made it. I cared that it was colorful. But I didn’t think that it might fall out of style. Who knew that a pencil version

Here’s what I do know: They were made in the USA by Berol (PencilPages tells me so). I know that they hit the market during back-to-school season 1993. According to a 2002 article in the trade journal Chain Drug Review, they were unveiled at a trade show for the School and Home Office Products Association (SHOPA) in 1992. Apparently, they were originally marketing toward girls:

“The big news for us is the debut of a number of extensions to or Yikes! line, which has been a tremendous success, especially among teenage girls,” says Rosie Gillotti, manager of marketing administration at Empire Berol USA.

The extended Yikes! line will include rulers, sharpeners and pencil boxes–all sporting the kinds of wild colors and offbeat designs that ignited the popularity of Yikes! pencils.

If you noticed the commercial, it featured a boy and his father. My little sister was too busy with her Lisa Frank pencils and, if I’m not mistaken, that was about the time Hello Kitty was introduced to the US. Rainbows, unicorns and kitty cats beat out wacky colors and shapes with the archetypal 90s girl any day.

They were in stores at least through 1996, although if I remember correctly, it was much later before they disappeared. At some point in the product line, they started being endorsed by Nickelodeon. That’s about the time they gained a lot more vivid patterns instead of just contrasting solid colors. 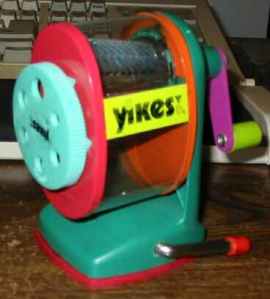 When they created the pencils, they also had erasers, rulers, and a really kick-ass rotary pencil sharpener! A friend had the sharpener, and from the dim memory I have, it worked really well, and sharpened to a short tip. I am trying desperately to find one.

Yikes, it seems are extremely scarce and hard to come by (even more so than the Blackwing, it seems!) I see them show up in eBay auctions every now and then, usually in a lot with other pencils that, to me, have no value. The pencils in the images are a collection I amassed over the period of a few years. One of my favorite fans of scribomechanica, Slywy, sent me the big silver one in the corner with the ridges and the large polymer eraser. The other ones came from a very generous benefactor in a HUGE collection of other pencils from the 90s, some of which I hope to feature later. I heard from him because of a wanted ad in the PencilPages Classifieds.

Because of their relative scarcity and impracticality for use, I’m going to take a page from PencilTalk.org‘s book and not review their performance. I can tell you that I remember the lead to be smooth, but not extremely dark. The dyed wood sharpened very smoothly (and of course looked really cool mixed in with all the wood-colored shavings), and the round and triangular pencils were easy to hold and comfortable. I remember the ridged pencil barrels to be sharp and uncomfortable, and sure enough, when I hold it in my hand now, I can imagine the blisters I got on my middle finger from holding that sucker. I have no memory of the eraser, and the samples I have now are too old to accurately show what the eraser used to be like.

If you find one of these pencils in a desk drawer, or an old Trapper Keeper, or some forgotten place where it’s been sitting for 17 years, let me know. I’d love to get a hold of it. Or better yet, keep it for yourself and treasure it. Remember the days when you would come home from school, have a Mondo (or a Squeezit, if you were at my house), maybe eat some Dunkaroos, and start working on your homework? Math was made so much more bearable with a bright yellow pencil with purple wood.

46 thoughts on “Yikes! pencils: Graphite-filled emblems of the 1990s”