This winter — I tell you what. It’s really kicked my butt so far. Between a record-setting month for snowfall, and several days of -12° (or less) weather, I’m ready to leave Indiana behind.

I’ve never paid them much mind, though. They were a niche that was too wide to explore, and would detract from my main mission: regular wooden pencils. Only in the last couple of years have I really become interested in owning some, ever since my friend Amber gave me a selection of vintage agricultural vendor pencils.

These are all well and good to collect; to polish and display and cherish, but what about actually using them? Aaron Draplin uses the old ones and just ignores the petrified eraser. Craig over at The Jungle is Neutral uses the old ones, too, going so far as to strip an old one down to the bare bones, switch out the pencil, polish the eraser, and put that to strenuous field use. I did something similar to an old one, though I left the wonderful graphic wrap on the barrel.

But I’ve become interested in what one can buy now. What kind of bullet pencils are available on the market today? Not a lot, it seems. But I’ve been able to get ahold of a few of them, and pitted them against each other.

After spending some time on eBay, I ran across a vendor selling, in bulk, blank, white bullet pencils — 100 for $20.

That should have been a red flag. But no, I pressed the “Buy Now” button. After all: 100 bullet pencils? For 20 bucks? Sounds great!

After a week or so, they showed up, and I tore into the package. I was immediately disappointed — the pencils have fallen out of their sheath in transit, so the envelope was a mess of graphite and dirty plastic.

How did this happen? The pencils are so shoddily constructed, the back of the pencils don’t fit into the sheath, so they don’t stay together.

And when I try to push them in harder, so the little ridge would stay in the sheath, it just breaks the plastic:

I could have stopped the review there. The sole special functionality of a bullet pencil, to fold up and protect the tip, fails. But just for good measure, I figured I’d try out the actual pencil to see how it performs: 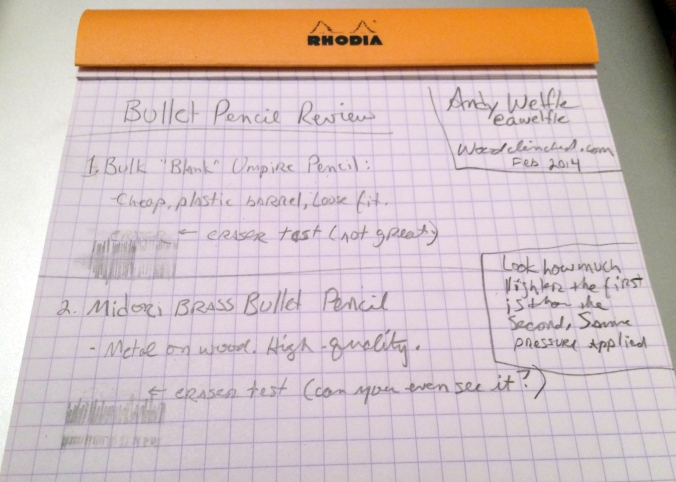 It may be hard to see here, but the writing on the product above (the bulk bullet pencil) is much lighter than the Midori Brass pencil, seen below.

This pencil performs similar to one of those cheapo golf pencils you can buy at Office Depot; 144 for $7. The core writes too lightly, the wood splinters when it’s sharpened, and there’s no heft to the pencil — it feelsl like it’s completely plastic.

(Of note: the cap on the back of the pencil looks like it’s metal, but it’s as plastic as Joan Rivers.)

To give this review something to compare it to, I got ahold of:

The Japan-based Midori Stationary Company is pretty cool. I’ve never used any of their products before, but they seem to have everything — paper, notebooks, things like staplers, paper cutters and paperclips, and pens. From what I can tell, this is the only pencil they make. They also have a bullet pen, which is similar in frame to the pencil.

The four components that make up the Midori brass bullet pencil. Simple and high-quality.

In a nutshell; it’s really solid. It’s made of actual metal, which automatically puts it light years ahead of the plastic ones. The eraser, which fits neatly into the ferrule that’s machined from the same piece as the sheath. It’s a little wider than a normal eraser, so it should last through several new pencil inserts (and when it finally does wear down, refills of the pencil and eraser are available for purchase).

Speaking of the pencil insert, it performs really well. Typically, I’m not a fan of round pencils, and I am usually ambivalent toward natural, wood, but the quality of this really shines through. Just look at this grain!

There is a faint, matte, clear lacquer on the barrel that gives it a silky, soft feeling. it’s light weight, but not cheaply, which is an interesting sensation because the brass sheathe is fairly weighted. That gives it a decided top-heaviness that emulates old, vintage bullet pencils.

How does it perform? It’s smooth and dark, and definitely of high quality. I’m pretty unfamiliar with Midori’s other products, and this seems to be the only thing they make with a wooden pencil. I’m glad to know they took care to use a quality pencil, instead of inserting some generic golf pencil, which would be easy to do.

(Posting this image again, just for good measure. As you can see, the marks are darker and erases more smoothly)

Once this pencil insert wears out, I might replace it with a half of a Golden Bear or even a Palomino. I still like the hex shape better, though the heavily lacquered colors might clash a bit (perhaps a Forest Choice?)

Also of note is the pocket clip, which admittedly I don’t use. Normally I just toss it in my front pocket with my keys. I can whip it out to jot something down in my Field Notes. But if I wanted to clip it to a shirt or to the notebook, the clip is great.

The Midori is available in three colors — original brass like mine, brown-coated and white-coated. I vastly prefer the brass color over the others. According to Jetpens, the “[b]rass body will develop the characteristic vintage look over time.” Which makes sense.

The major downside of the Midori pencil is its price — it’s $21, which to be honest, isn’t that much of a problem, because this thing will last a long time. And while it costs more than a hundred times the price of those other pencils, it is literally worth a hundred times more. So you’re still getting your money’s worth.

I think the choice is clear: if you have any desire to use a bullet pencil, and you want something more functional than an old, vintage bullet pencil, spend the $21 for the Midori brass pencil. For the love of Pete, learn from my mistakes — stay away from the crappy plastic pencils.

I think there still exists a market, however niche, for a good quality plastic bullet pencil. Something right around the $5 price point. If there is a new pencil I can buy like that then brother, let me know. But in the meantime, this Midori pencil is a keeper. I don’t usually have the attention span to personally subscribe to the concept of an “everyday carry” like my new scribomechanica friend Tim, but this is solid, beautiful, unobtrusive and perfect for a permanent addition to my arsenal.

(Disclaimer: The Midori Brass Bullet Pencil reviewed here was given to me free of charge by Jetpens.com.)

12 thoughts on “Bullet to bullet: the Midori brass pencil vs. the bulk, blank “umpire pencil””