Hold on to your hats — you’re about to see a pen review here on Woodclinched. And it’s not a pen that’s arguably a pencil, either — it’s a real, for-sure rollerball ink pen.

I don’t do it lightly, though. It’s definitely relevant to my personal interests, and hopefully to yours, too.

Last week, I got to try out the Baron Fig Squire pen, Baron Fig‘s latest, and massively successful, Kickstarter project.

I was in New York City last week, and I got to hang with some pencil friends. I went to CW Pencils, of course, to see Caroline and Caitlin, and saw my good friend (and Erasable group member) Harry Marks. I also had brunch with June Thomas, who is a listener and active group member, and a journalist and podcaster herself.

AND, I managed to take the N over to Queens to see Joey and Adam at the Baron Fig studio.

We were planning this visit anyway, but it just so happened to take place a couple days after Baron Fig’s Kickstarter launched for the Squire — a new custom-designed rollerball pen. Being the curious person that I am, and them being the passionate, generous guys they are, they let me try it out.

A word about the photos

Adam and Joey are obsessive about getting the details right. As soon as I whipped out my iPhone to take some pictures of the pen and the writing, they cringed. So I let Adam take some DSLR pictures of me writing with it, which are included with this review. These may be the best original photos ever displayed at this blog; as Adam is a WAYYY better photographer than I, by a few orders of magnitude.

Since the Kickstarter just, um, kicked off, I’m not sure if the pen among a few advance prototypes that I was using will be the final product. It’ll be hard to match that level of detail, though — the anodized aluminum of that pen body was great. It reminds me of the little iPod Minis from several years ago that came anodized in several colors.

Baron Fig’s will be available in silver and a darker charcoal color. I originally favored the charcoal, but I think Joey convinced me to go with silver. It’s gonna look so good with the base color of Confidante and my MacBook.

(I know, I know. That was a ridiculously hipster thing to say. I heard it too.) 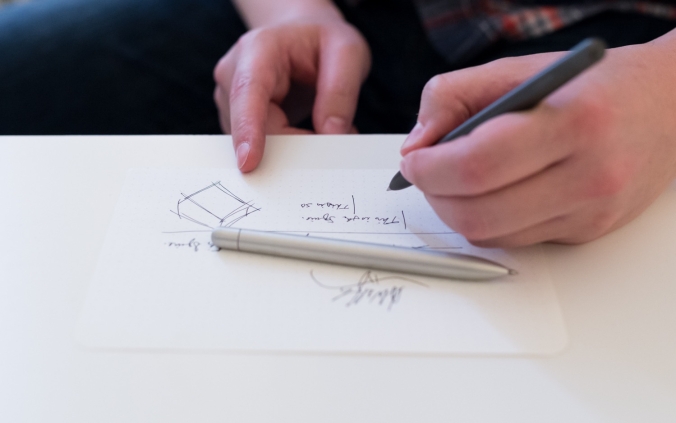 The body of the pen has a slight tapering to the back, so as to be shaped sort of like a long, subtle torpedo. The shape reminds me a bit of a nib holder for a dip fountain pen, which is a pleasant experience.

The length is also pretty great. At five inches long, it’s somewhere between a regular-size pen and a “pocket” pen. If this was a wooden pencil, we’d say it was at the “Steinbeck Stage,” or the point in which the back of the pencil hits the webbing of your hand between your thumb and index finger — John Steinbeck’s sweet spot for pencil length.

It feels weird for me to rate the way the Squire writes — it uses a Parker-style refill, so presumably it writes like any other pen that uses that refill, right? (I’m totally open to any more experienced pen reviewers out there educating me.)

In any case, it writes smooth and dark, like most fine rollerball pens. The tip, if I recall is 0.6 millimeters, which is just great for me. I know a lot of 0.38 millimeter fans other there that think it’s just a little too blunt for their purposes, but I don’t care. It’s still a finer line than most fountain pens, and didn’t skip a bit.

However, I want to dig a little deeper into the performance that the pen body itself gave — the part that makes the Squire unique to Baron Fig.

It’s well balanced, as they demonstrate in some of their marketing materials, and it feels great in my hands.

(While I’m generally a wooden pencil user, I do have some nice fountain pens in my possession that I occasionally use. It feels like that, though I can grip further down on the barrel than with a fountain pen. In pencil terms, it’s a medium-length point instead of a long point.)

The top end of the pen twists to advance the pen’s tip. It was a bit hard at first to turn — Joey’s been carrying around a prototype for a few months now, and in that pen, it twists much more easily, and has a satisfying terminal click once it reaches the end of the process. He thinks — and I agree — that it should wear in a little bit with time, like quality leathergoods.

The only criticism I can offer in the pen’s design is the lack of pocket clip. That’s the primary method through which I carry my pens, probably because I’m a big dork.

The thing is, though, that I completely understand the design choices that they made with excluding a clip — it’s so, so simple and clean. It’s akin to Apple’s very deliberate choice in excluding the floppy disk drive from the iMac, or the optical drive in 2011-on-model MacBooks, or the USB port from the latest MacBook models. They’re stripping it down to its barest essentials, focussing their efforts on designing the core product, aspiring to letting it do what it does very well.

The pen is no different. It writes. It’s a pleasure to hold in your hand from any angle, which a pocket clip might detract from.

I didn’t get to take the advance sample home with me, which is all right. I already pledged for one plus a limited edition Confidante that bears the little sword logo for the Squire. It was an honor enough to be able to try it out!

As a departing gift, the guys gave me a pack of the “studio edition” of Apprentices — available only to those who go visit their studio. The notebooks inside are wine red, bookmark yellow, and their signature neutral grey — all colors that recur in their branding and product design.

How to get your Squire

At the time of publishing, the Kickstarter campaign is 573% over goal, at $86 thousand. For $50, you can score a pen, in silver or charcoal. For $20 more, at $70, you’ll also get a limited edition Confidante, their signature notebook, with a special little Squire logo on it.

Check out the campaign, here.

4 thoughts on “An inky review of the Baron Fig Squire”