I don’t often have guest reviews on this blog, but when Harry C. Marks comes at me, I know it’s gonna be good. Harry’s an internet-friend who I’ve made sure to hang out with in real life several times, a long-hand novelist, and, like me, a stationery lover. He recently reviewed the latest Field Notes release, Dime Novel. 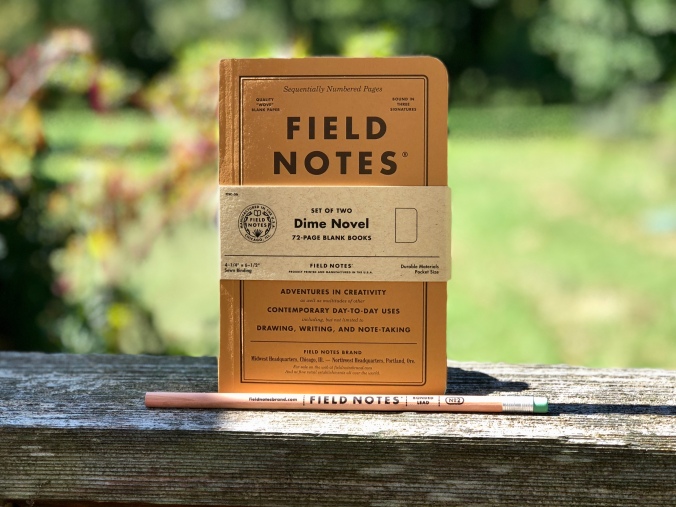 I’ve appreciated Field Notes notebooks for some time. I wouldn’t call myself a “fan” in the truest sense as I tend to skip most releases. Nor am I an obsessive collector, so when an edition comes out that captures my attention, it’s something special.

The first Field Notes I ever bought were the Drink Local editions. The perfect notebooks for Fall in hues of brown and orange, fallen leaves scattered on the table. Even the covers crunched when I cracked their spines.

Then came the Workshop Companion edition—six notebooks meant for six different kinds of projects, from woodworking to car repair. I’m not much of a handyman, but the package was too beautiful not to have on my shelf.

Finally, there was Byline. This was it: the perfect Field Notes for me. A departure from their usual staple-bound pocket fare, the Byline was an extra-long, spiral-bound reporter’s notebook clad in a utilitarian gray and filled with some of the smoothest, creamiest paper I’d ever used. Its brutalist aesthetic concealed an inner beauty, 70 pages of gold between two layers of rock—and I craved more. I traded with friends, some sent me spare books in care packages, and I hoarded them among my growing collection.

I thought I’d never find another book as perfect as the Byline. Then I opened my email last Monday afternoon. 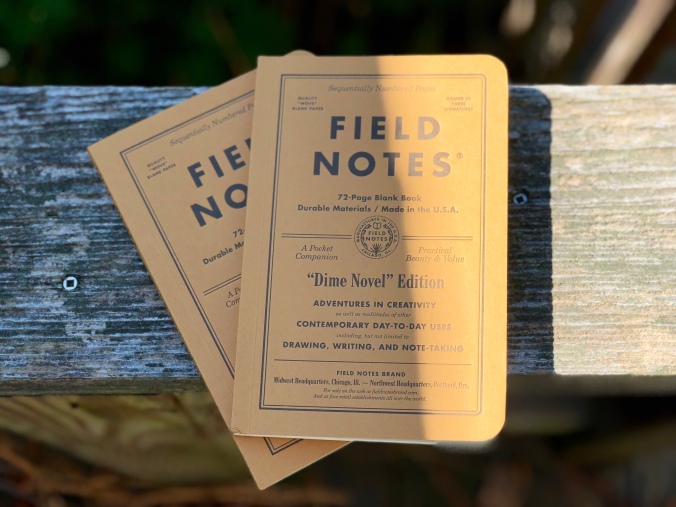 The Field Notes Dime Novel Edition is the company’s Fall 2017 release and the 36th limited edition in the lineup.

And it. Is. Gorgeous. 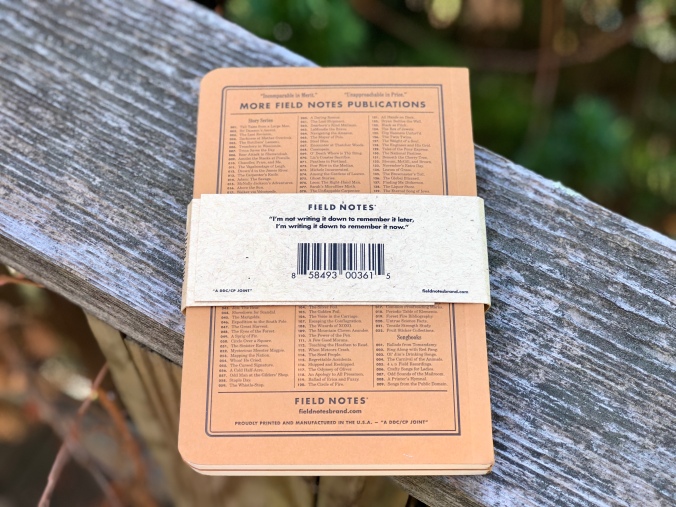 Reminiscent of old dime novels of the 19th century, the notebooks stand at 4-1/4″ by 6-1/2”, roughly the same dimensions as their namesake. Three separate notebooks comprise the 72 pages within and are Smyth-sewn inside a thick, brown-orange cover.

Field Notes is no stranger to experimenting with its covers. The blinding, aggressive Unexposed editions were better left that way. The cherry veneer of the Shelterwood put a tiny tree in everyone’s pockets. The Snowblind edition forced writers and note-takers out of the house as its stark white cover shifted to blue when exposed to sunlight. These gimmicks all had the same purpose: differentiation. No other pocket notebook had a wooden cover, nor one that changed colors in sunlight, and no company was blind-mailing subscribers random notebooks without first knowing the contents of each envelope.

This is what makes the Dime Novel edition so interesting. The form factor is different from the usual lineup, but not so drastic as a Byline. The cover doesn’t have a pop-out ruler or foil coating. It’s just brown paper debossed with black ink. While more elaborate than, say, the America the Beautiful edition, it lacks the pop of some of the more intense covers mentioned above. 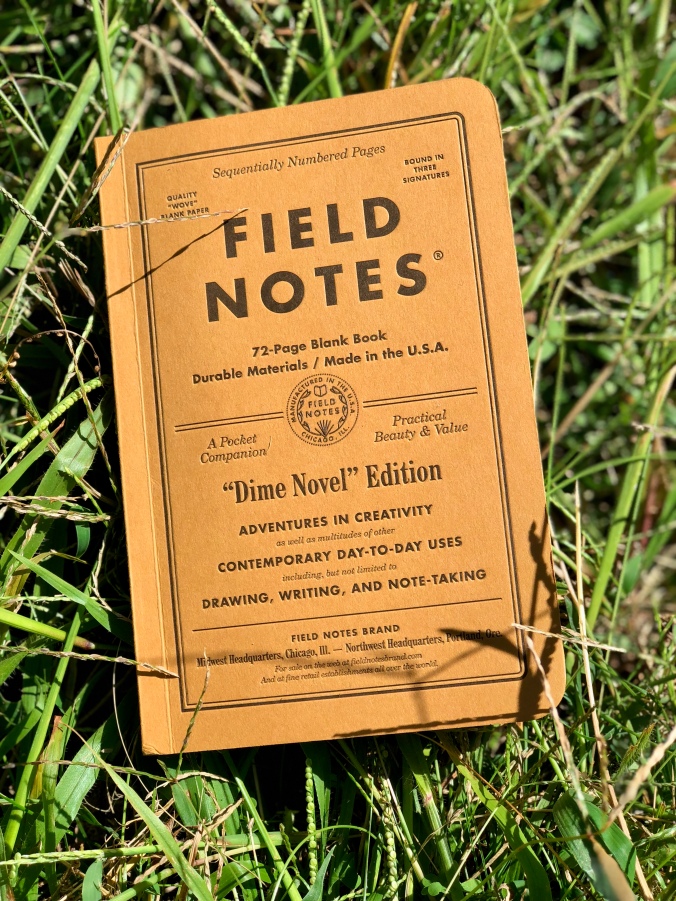 That said, the Dime Novel cover isn’t simple. Within its black borders are lines of text meant to sell the notebook and illustrate its purpose. “Practical Beauty and Value,” “Adventures in Creativity,” “A Pocket Companion” all adorn the front, arranged to fill the space and yet be easily glossed over. The two things that stand out are the words “FIELD NOTES” at the top and “‘Dime Novel’ Edition” toward the bottom. Everything else is white noise. The surrounding text provides dimension, but can be easily ignored.

The original Beadle dime novel covers were not meant to be ogled. They were there to keep the pages from falling out. I see Field Notes’ homage in much the same light; the deceptively simple cover is there to protect your words and sketches, then get out of the way. What’s surprising about this edition is just how inspirational and aspirational it seems. This is a book begging to be written in and yet holding it, it feels too beautiful to sully with one’s own musings. How funny is that? A notebook modeled on cheap, mass market “literature” isn’t cheap looking enough for the average to-do list.

The 72 numbered pages inside are a hearty 70# stock seemingly made for pencil. I tested the paper with a Blackwing 602 (firm core) and a Blackwing 24 (extra-firm core), as those are the two pencils I use most. The paper has a very slight tooth to it that grips the point tightly, but doesn’t erode it to a nub after a few strokes. Artists and sketchers will probably like this paper a lot, but I defer to them for final verdicts, as I do fountain pen users. As a pencil user, I’m pleased. 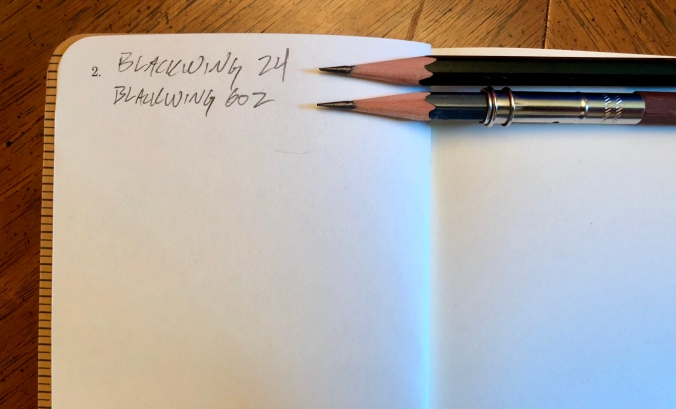 This edition feels like a paperback in the hand. Given a few weeks in a back pocket, it’ll probably start to look more like an original dime novel than the crisp notebook in these pictures, with the cover crushed and faded like your granddad’s old hat. My only complaint concerns the blank pages. I’d hoped a notebook centered around literature would’ve provide writers with the lines necessary to write their own, but blank is more versatile. Fair enough. It’s probably my bias talking anyway—I almost never buy blank notebooks and I have no use for grids.

NaNoWriMo is fast approaching and I’ve been outlining my first attempt in a Byline. I’d originally planned to knock out my daily 2,000 words in Scrivener on my laptop, but the arrival of these Dime Novel notebooks have presented a new challenge. With a guide slipped behind each page, might I tackle the Kerouac-ian effort of writing 50,000 words in one month by hand instead? The thought of seeing what could become a published novel get its start in a such a format is enticing. Even more so when I imagine the mason jar on my desk stuffed with Blackwing 24 stubs by the end of November.

Whether I decide to tackle NaNoWriMo digitally or otherwise is yet to be decided. What’s certain is my lust for this latest Field Notes edition. These books will be used and for something greater than to-do lists. They deserve it. Sometimes, you don’t need to reinvent the wheel to capture the attention of a jaded group of collectors. Sometimes, you just need to make a simple, beautiful notebook—a work of art meant to inspire other works of art, and these notebooks have inspired me.

Many thanks to Harry C. Marks for his review of this beautiful notebook! You can find Harry online at HCMarks.com or listen to his podcast, Covered, about writers and their books. In his current season,  he’s talking exclusively to women authors about their books, and recently chatted with pencil friend Caroline Weaver about her book, “The Pencil Perfect.” It’s so good, and very pencilly, so you should have a listen. —Andy