While I love pencils, and use them as much as I can, sometimes you need a good, sturdy ink pen. And I’ve often run into the problem of a disposable pen that has a great ink cartridge and rollerball, but is encased in a crappy barrel.

That’s why I got excited when I surfed The Pen Addict the other day, a great blog I check every day that feels about pens the way I do about pencils.

Apparently there is a pen called the Pilot Hi-Tec-C, a gel pen I haven’t tried (but the Pen Addict really likes!) Unfortunately, the barrel is a bit cheap and plasticky.

There’s a small design firm in Brooklyn called CW&T who found a solution to this problem — they started a Kickstarter projectfor a product called the Pen Type-A, a stainless-steel replacement barrel for the Hi-Tec-C cartridge.

This thing is really beautiful. It’s milled from a single block of stainless steel, and the minimalist barrel fits into a square sheath (that has a ruler on the side!) so well, it almost has a pneumatic sliding effect. 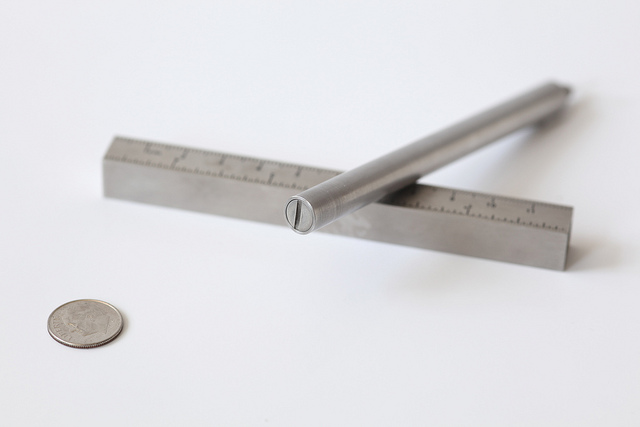 If you pay $50 towards the (fully funded!) Kickstarter project, you’ll get one of these pens, which is a deal, because it’ll retail for $99.

I’ll admit, I’m thinking about it. It’s supporting a small, creative venture, and this thing really is gorgeous.

Check out CW&T’s Kickstarter Project to watch a quick video about why they decided to make this thing. And if you’re on Twitter, go follow Che-Wei Wang, the CW of CW&T: @sayway.

4 thoughts on “The Pen Type-A”