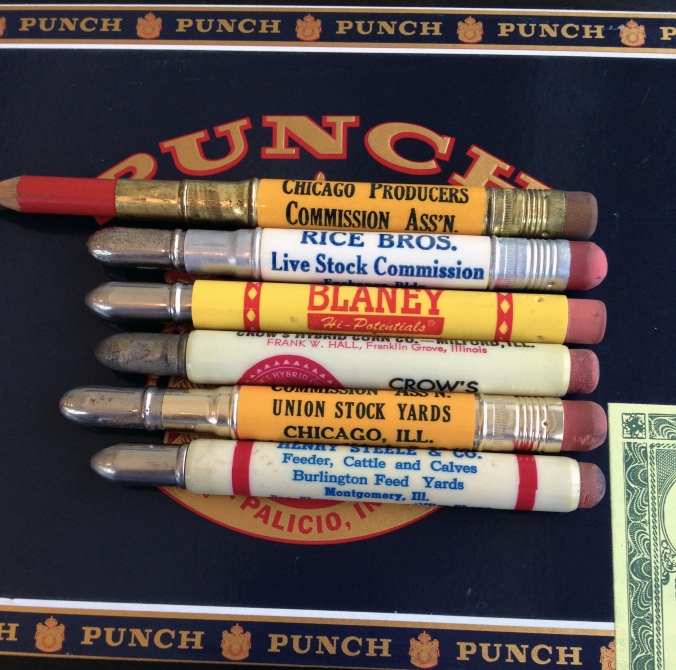 For reasons I can’t explain, I usually only talk about half of my pencil collection on here. I talk about new products, mostly — pencils available to most everyone that is for sale now.

But I also have a lot of advertising and souvenir pencils. Probably ten cigar boxes worth. They’re not particularly known for being good quality pencils, but they appeal to me in their uniqueness. Many of them are decades old; and I can only imagine that there are not many left in the world.

One subset of that collection are several agricultural bullet pencils. A good friend of mine gave them to me a few years ago after her grandmother died and my friend was in charge of cleaning out her farmhouse in Illinois. There was a drawer full of these old pencils — given to her by salesmen from seed supplier, feed yards, stockyards, and more.

I love these things, but they’re pretty decrepit.

I treasure them, though I never use them, mostly because they’re so old. The erasers have petrified and often, the pencil barrel has run down to no more than a nub . And I don’t have dozens and dozens like Aaron Draplin, perhaps known best among this community as the designer of Field Notes. Pencil Revolution interviewed Draplin back in 2011 about this very subject. Draplin loves these little guys. And for good reason:

First off, it’s the compact quality. I love having a tight little drawing tool in the front pocket at all times, and I’m here to tell ya, these little sonofabitches have saved my butt many a time…on airplanes, in meetings, in a pinch, wherever. I always keep one in the front, left pocket of my 501s.
…
What I love about them the most, is how banal they were back in the day. Simple, cheap advertising tools given away at local businesses. Feed-n-seed joints, car lots, insurance agents, what have you. Just crappy little promo items that packed a real wallop. I’ve got a couple old salesman sample sets. Old and beat up, and a look into what it was like to have a guy sit down and say, “Here’s what we can do for your company.” So good.

(See his entire interview on Pencil Revolution, in two parts: Part 1 and Part 2)

They are indeed so good. One of my few issues with wooden pencils is that when they’re new, they don’t fit easily into a pocket — they’re too long! If I need to easily carry around a pencil in a shirt pocket or pants pocket, and I don’t have a pencil halfway through its life, I’ll turn to the Zebra #2 mechanical or even — gasp — a Fisher bullet pen (though I can’t find mine as of late! I think it fell into the depths of the couch).

From a utilitarian perspective, bullet pencils are great. They’re really no more than 4 or 5 inches long when sheathed, but they extend out to full pencil length when in writing mode.

The trouble is, I don’t think you can get them anymore. (Pencil Talk doesn’t think so. Neither does Field Notes.) A friend of mine who owns a company that makes promotional products says that she was looking for those a couple of years ago, and came up dry. 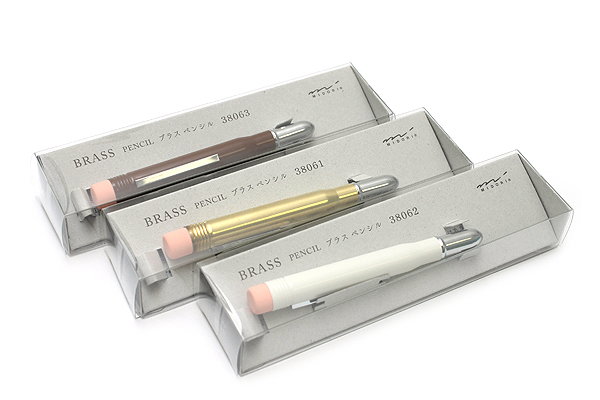 JetPens.com has something similar, the Midori Brass Bullet Pencil, but to me, it doesn’t count. It’s $21, and made of brass. This isn’t the vintage, plastic cheapie thing that is given away free. (On the other hand, though, the description says that the brass develops a patina after multiple uses, which is pretty cool. And you can buy replacement pencils and erasers to go with it)

If the promotional bullet pencil is just a relic of the past, so be it. While they’re far from the main course of my pencil collection, they’re a delicious, delightful appetizer. Whenever I see one, I’m thrilled to run across it. And if they are becoming more and more rare, I have all the more reason to treasure the few that I have. 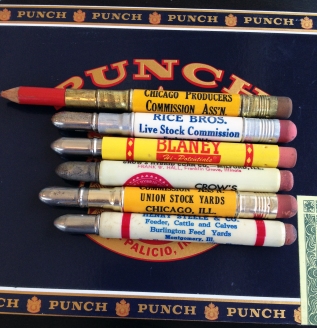 I love these things, but they’re pretty old. 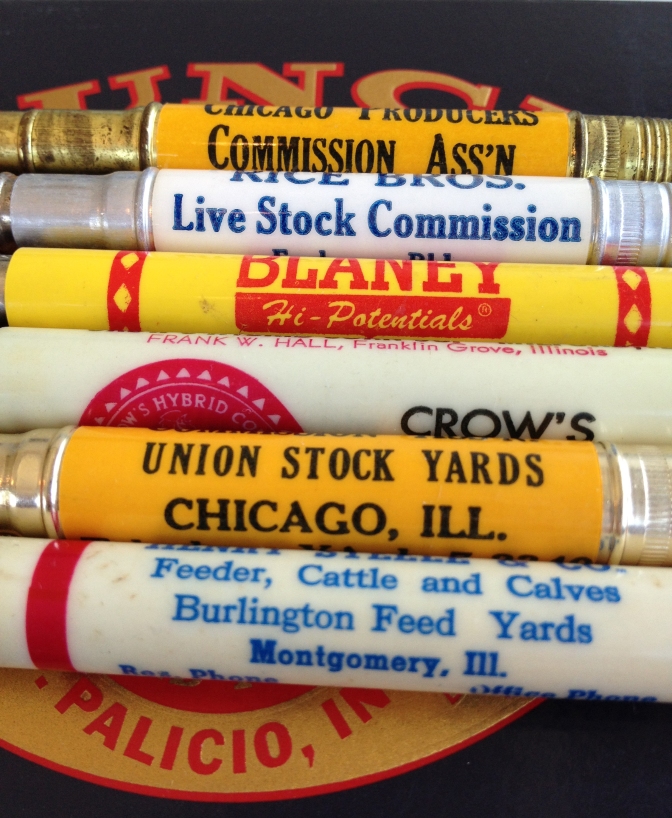 20 thoughts on “Bullet pencils: Pocket-friendly utensils from a bygone era”