Just across the bay from San Francisco is Oakland, a city that often lives in the shadow of SF, but has so many cool attributes in its own right.

On Sunday, I went to one of Oakland’s gems, the Oakland Museum of California. In addition to some amazing permanent installations, we saw a temporary exhibit featuring the photography of Dorothea Lange, a prolific documentary photographer from the early- to mid-1900s.

She’s perhaps best known for her series on the displaced farm families as they migrated from Oklahoma to California in the 1930s, and on the forced internment of Japanese-Americans by the US government during World War II.

(And among a certainly online community, she’s also known for having a Blackwing Volumes edition tribute — the red-ferruled Volume 344.)

The photography was powerful, the narrative was fascinating and there were really great interactive elements of the exhibit, featuring creative photo cropping, grouping photos to tell a story, and other immersive lessons. But the piece that really held my attention was a letter written to her by John Steinbeck just a few months before her death in 1965. He thanked her for the use of her photographs for a collection of articles he wrote in a pamphlet called Their Blood is Strong, about the Great Depression and American migrant workers.

(If you don’t know who John Steinbeck is, I can’t help you. But let’s say for the sake of this article that he’s a guy who wrote books and is perhaps the most famous modern pencil user. He also has a Blackwing Volumes tributed to him — the all-black Volume 24.)

When I got up close to the display, I noticed that the letter was written in pencil! Its a bit hard to tell from this photo, but the marking is extremely dark. If Steinbeck was writing with one of his favorite three (the Eberhard Faber Mongol, the Blaisdell Calculator 600, and the Eberhard Faber Blackwing 602), I’d guess that it’d be the Blackwing. (An Erasable group member put together a project called The Steinbeck World Tour, a collection of those three pencils that was mailed to participants, so they could experience them. I got to try them out in Spring 2016, and can speak from experiecne that the Blackwing is indeed the darkest and smoothest. Although the Blaisdell is pretty close.) 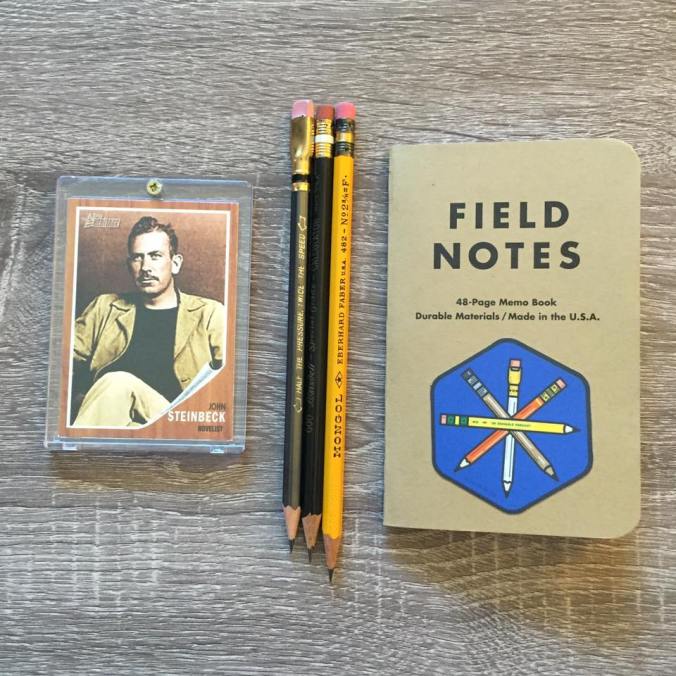 The Steinbeck Trio: three pencils lauded by Steinbeck, accompanied by a baseball card and an Field Notes pocket notebook with an Erasable sticker.

I love this quote from Steinbeck’s letter to Lange:

We have lived in the greatest of all periods. If the question were asked, if you could choose out of all time, when would you elect to have lived, I would surely say — the present. Of course we don’t now how it comes out. No one ever does. The story ends only in fiction and I have made sure it never ends in my fiction. 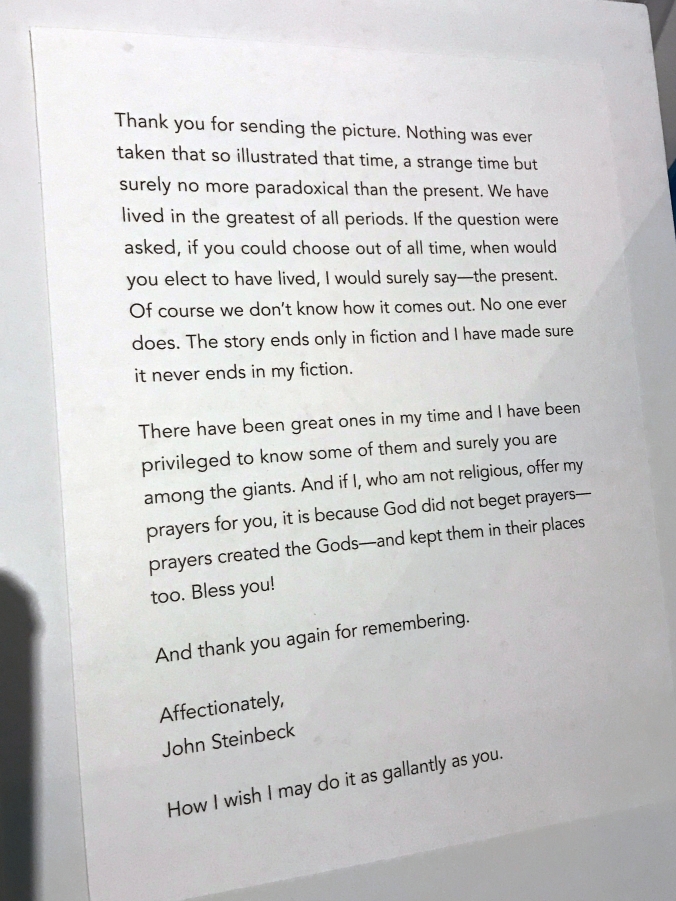 Notice how great Steinbeck’s handwriting was. It’s hard to believe, since he wrote so much by hand, that his pencilmanship didn’t degrade over time. But I guess when you’re writing a letter to one of “the giants” like Dorothea Lange, you slow down and take your time so your writing is legible. Even if you’re John Steinbeck.

Thank you to the Oakland Museum of California for the exhibit, and for giving me the opportunity to see this artifact of an  interaction between these two giants.

2 thoughts on ““How I wish I may do it as gallantly as you:” A letter written in pencil to Dorothea Lange by John Steinbeck”