It’s been a minute since I’ve written anything about Palomino Blackwing/Pencils.com/CalCedar. But it’s not for want of any new products from them. They’ve been busy!

Their latest release is a great follow-up to my post in Summer 2014 about the Blackwing Slate, a Blackwing-branded A5-sized journal. Since that release, they haven’t said much about their line of paper products, though I’ve seen the Slate in most stores that carry their pencils. I figured they’ve been concentrating on their (very ambitious) quarterly Volumes releases.

But it was in the last Volumes release that they gave us a taste of what’s to come. The Volume 205 edition (the “jade” edition) included an extra. A small, single, pocket-sized notebook with the same leather-ish polyurethane black cover as the Slate.

Later on, they announced it was called the Blackwing Clutch. And they followed that up with the Summit, a larger, 8.5 x 10” edition.

Like the Slate, the Clutch and the Summit are plain black with a creamy, thick paper. Unlike the Slate, they are perfect-bound with a contiguous cover from front to back, similar to a Write Notepad notebook. And they have a soft cover; similar to a Moleskine, though with a better, thicker cover.

One thing about both of these new notebooks was bugging me — the name. The “Slate” makes sense — it’s another name for a handheld writing surface. But what about the “Clutch” and the “Summit”?

“The ‘Clutch,’ because it will (hopefully) come in clutch when you have a great idea on the go, and because it opens like a clutch bag. The ‘Summit,’ because we envision this being more of a meeting/desktop/workplace notebook, and because it’s our largest notebook offering.”

(“Clutch,” for those of you who don’t know, is slang for “performs under pressure.”) 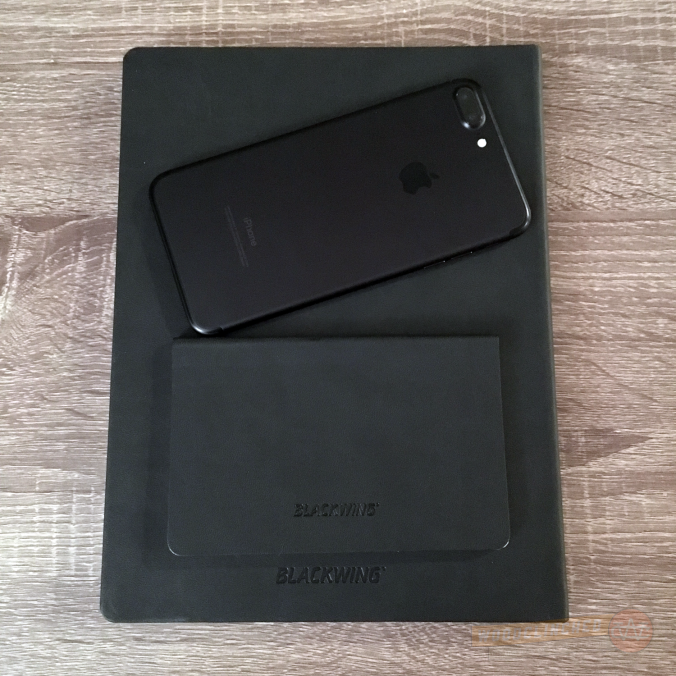 I’m a fan of the matte black covers — they match my iPhone really well, so when my notebook and phone are laying on a desk next to each other, it looks like I planned it that way.

That said, I’m generally drawn to stationery items with a bit of color. The Baron Fig Three-Legged Juggler and the Write Notepads Kindred Spirit are two notebooks that come to mind.

But these are subtle and classic, and complement their pencils really nicely. Blackwing pencils are themselves not subtle (though I do think most of them are pretty classic), so unlike a bright pocket notebook (Say, the Field Notes Unexposed edition), these notebooks won’t draw attention away from them.

One of the big advantages to the Clutch, Blackwing says, is to use it sideways, in “clamshell mode,” as it were. Two things about this:

Like other perfect-bound pocket notebooks, the Clutch is bound in such a way that in order to let it lie open, one must “crack” the spine —

The Summit makes no such claims. The binding is a bit different — it’s more of a traditional journal, with the cover material tucked underneath the end sheet.

Like the Slate, these two has a thick 100gsm ivory paper. It’s luxurious and smooth, but kinda smeary. I don’t know why I didn’t notice it in the Slate, but looking back, the Slate’s paper seems toothier. Check out the smear from this Blackwing Pearl:

And that’s not even the softest Blackwing out there.

I am, however, not a huge fan of the dot grid here. It’s well-spaced — just about the same as the Baron Fig Confidant. But the dots themselves are big and bold, which makes them feel a bit intrusive. I would much prefer them to be smaller and lighter.

Both the Clutch and the Summit come in dot grid, lined and blank (the latter two I haven’t tried).

This is where you really see what “luxury brand” means. Like their pencil counterparts, this is not cheap. A three-pack of the Clutch notebooks are $14.95. The Summit is just a dollar cheaper than the Slate, at $21.95.

Is it worth it?

This is something you’ll have to determine for yourself. For me? It’s worth the quality they put into the notebook. They seem way more sturdy than the $12-per-pack Field Notes (only time will tell, though).

However great the quality is, I still would prefer a bit of color in my notebook. The Baron Fig Confidant and Vanguard limited editions are great for me in that regard, as are Write Notepads’ pocket notebooks. The Blackwing notebooks don’t appeal to me, aesthetically, as much as they do. If you like a subtle, classic black, I wholeheartedly recommend them.

I will certainly keep coming back to Blackwing for pencils, though. My Volumes subscription renews in a week, and that’ll be the start of my third year as a subscriber.

And thanks to Blackwing for providing me a pack of the Clutches and Summits at no charge for review purposes.

3 thoughts on “Two more Blackwing notebooks to complement the Slate”